This page was last updated in March 2021 and the prices ain't going up.

Discs are $10 and include full original disk with insert unless otherwise marked (CD-Rs are in slip cases).


Still sealed vinyl!
Vinyl records are $10 + extra $2 shipping charge in addition to regular order shipping. If you are ordering more than 2 records, please contact me ( ) about bulk shipping prices. Sprawl started in '86 at Rice, when Nick met Matt and Dan on his dorm balcony late one night. Nunally had some crazy bass he had made at camp or somewhere. We toured from the beginning and had a mini-van crash outside of Albuquerque while this friend of ours, Shum, was driving. Shum is now this nurse union superstar in Cali who defeated Schwarzenegger's referenda. We went through tons of different horn players until we got Clay, Bo and tthe Reverend Dave Dove together. We recorded a tape, a vinyl record ("Guise of a Salesman"), and finally our first CD in '90, "King of Parking." 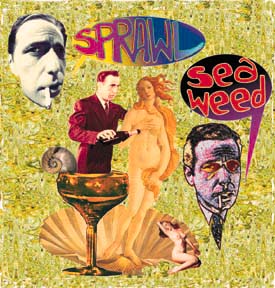 A short time after Dave joined, we played at his high school talent show and started off with a reggae tune, but everyone started slam dancing and we only played for a few seconds before they closed the curtains and cut the power. We put out the Texas Funk Compilation and recorded our second CD "The Deflorist." We played mostly punk clubs and had a DIY approach inspired by groups like the Minutemen. Sprawl toured all around the US, and had especially great shows in El Paso (400+ kids), Austin, and Riverside CA. We had two particularly important shows -- one with The Dead Milkmen when we first connected with a huge audience at the Axiom, and the other with The Red Hot Chili Peppers when we played for thousands of people. We also played with Skankin' Pickle, fIREHOSE, Fishbone, Gwar, Missing Foundation, and Fugazi. We did the production of Jesus Christ superstar at the Axiom with deSchmog, Fleshmop and The Joint Chiefs. Joey joined when Dan quit and we recorded the "Heat Miser" ep and "The Man with the Yellow Hat." We sold out Fitz alot and had kids as young as nine at our shows. Once we and fit over 30 people in the van with us in New York. Once Depeche Mode walked into a show of ours in Salt Lake City and promptly left. Once a man in Fresno told us "you guys destroyed," and we thought it was a compliment until he started screaming that we had destroyed everything and he had to be thrown out of the club. One time cops walked in and shut down our show at Fuzz Gun in Beaumont. When Joey quit we broke up and played our last show in Houston at Fitz and our last show ever in some random town in Louisiana where we had never played before.

In October of 2007, Sprawl did two reunion shows. One at Rudz, and the other at Fitz for the Axiom reunion. The same weekend, they released RWE013 "America is Dying of Wetnurse" a CD of live and unreleased tracks.

We recorded such memorable titles as:

-Matt Gets Arrested While Hitch-Hiking In The Same Louisiana County In Which A Member Of The Ku Klux Klan Was Elected To The State Legislature
- F-Word radio
- Sugar Smax
- Back To The Womb
- Tie A Yellow Ribbon Around Your Fucking Red Neck
- Slow Leakin' Waterbed
- Ska Mitzvah
and we really honed in our ska titles around a concept:
- Blue Green Slime
- Sea Weed
- Mold the king of parking

Most of us lived during these years on Lexington, right next to 59 between Shepherd and Greenbriar for about $150 each. There were eight or more different houses at a time that had us and our friends living in them. It was a nice form of communal living with the sound of the freeway to lull us to sleep after all night parties. Towards the end of the life of the Sprawl house, a friend fell through the floor and into the mud under the house while using a crazy little cramped bathroom. Now it has all been mowed down and is a big lawn, which is kinda cool, but maybe soon they will build something hideous there. The Man with the Yellow Hat

This is by no means definitive and I would encourage any other Sprawl people to add to, modify, or deny the whole thing.